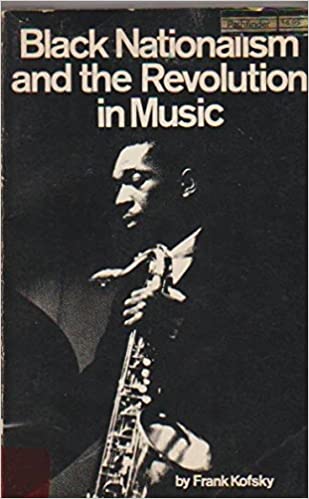 Frank Kofsky wasn't a musician or a jazz critic by profession. He was an academic whose main gig was as a historian, though he'd also studied physics and biophysics for eight years.

But he was a hardcore jazz fan and had been a contributor to several publications prior to the release of this volume that ignited a firestorm in journalistic circles when initially released, and still can invoke plenty of heated discussions.

Kofsky was celebrated by some, excoriated by many others, and remains a highly controversial figure today (he passed in 1997.

For openers, Kofsky was an avowed Marxist, something that then and now immediately spurs reaction.

Second, he didn't deal in the type of stylistic breakdowns or analysis of individual techniques that many critics feel is essential to giving readers an understanding of jazz (and for that matter music in general).

Instead, he approached jazz predominantly from a cultural and political perspective, defining it as a black creation that could only be accurately assessed by those with intimate knowledge of the culture from which it originated. Though he never quite specifically said only Blacks could or should play or write about it (despite being accused of exactly that by some of his detractors), he was very dismissive of most white jazz critics and a lot of white players.

Kofsky felt far too many jazz critics didn't truly value the music, not just because they didn't understand it, but because they had so little respect for the people and environment from which it came. He seldom used the term racist, but it was quite evident that he felt there was plenty of that going around within the critical world. He was equally contemptuous of record producers, labels, and promoters, all of whom he saw collectively engaged in rank exploitation and mistreatment of great musicians.

The book's biggest coup is three chapters featuring interviews with John Coltrane, Elvin Jones, and McCoy Tyner. He lets them address questions regarding whether they feel they're destroying jazz, the value (or worthlessness) of jazz criticism, their treatment in clubs and many other topics. He also looks at the impact of Malcolm X in regards to jazz (he was a huge fan and supporter of the music), and also examines the rise of black political radicalism and the importance of Amiri Baraka's "Blues People" among other subjects.

"Black Nationalism and the Revolution in Music" still reads well some 50 years later. Sadly, many of the ills it exposes and criticizes remain problems in the 21st century.